Suzi lost her hearing 7 years ago, at the age of 24, as a result of Neurofibromatosis Type 2. After becoming completely deaf, she began to learn sign language work but still continued to use lipreading as her main method of communicating in everyday life. 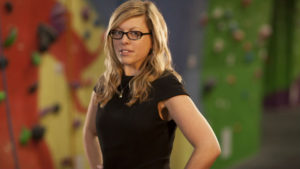 Two years after losing her hearing, Suzi had acquired her level 1 in BSL and embarked on a new career direction attending Reading University however, she was faced with BSL interpreters and struggled to fully understand her lectures. The university department worked with Suzi to find the right communication support and she was finally introduced to a lipspeaker who also used some sign language. It was the first time she felt able to fully communicate and began to thrive.

Suzi now has a degree in Psychology and Business Entrepreneurship, and is studying an MSc in Child and Adolescent Mental Health. She is also founding CEO of iDID Adventure, a charity that uses adventure sports to improve well-being, build self-esteem, ad increase confidence in marginalised young people. Since launching, iDID has supported hundreds of young people through their specialist programmes, training and events and continues to raise awareness of the therapeutic applications and adaptive methods in adventure sports.

Passionate about inclusion, Suzi is a trustee of Deaf Unity, an associate at Common Purpose, and a member of the Equity Steering Board for the British Mountaineering Council. She also advocates for a greater awareness of issues faced by deafened people when trying to access professional communication support.

In her role at iDID, Suzi engages regularly in public speaking and delivers training to a wide variety of organisations across the UK. As a result of her work with iDID, she has been recognised through a number of awards both personally and professionally.

Further to her role within iDID Adventure, Suzi also owns a personal assistant agency that supports individuals with additional needs and mental health issues to lead an independent life. Outside of work, Suzi is a keen climber and co-founded Deaf Climbing UK as a means to promote better access to rock climbing for deaf people.

When the summer comes and she is not working Suzi loves nothing more than spending time on the lake wakeboarding and loves to encourage people to try it!